CSIC, A PIONEERING BODY IN THE IMPLEMENTATION OF MEASURES TO PROTECT KNOWLEDGE

Trade secrets are a fast and competitive method of protection in all types of organizations; a tool that is not subject to the evaluation or assessment of any government institution or authority, that has an immediate effect (as there are no waiting times for the protection to be effective), and that requires no payment of fees. Therefore, the entry into force of the Trade Secret Law in Spain is an additional boost for innovation, technological development and the protection of knowledge of companies and research bodies.

In many cases, trade secrets complement the protection granted by patents and, in others, are the only way to protect certain knowledge generated by the R&D of companies and public entities.

In this sense, PONS IP has had the opportunity to talk about Trade Secrets with one of the pioneering organizations in the use of this type of protection. We are referring to the Consejo Superior de Investigaciones Científicas, CSIC, and more specifically to Javier Etxabe Oria, Manager of the Protection of Results and Promotion of EBTs Unit of the Deputy Vice-Presidency for Knowledge Transfer (VATC) of the CSIC.

Since 2013, as Javier Etxabe Oria tells us, the CSIC has been applying the necessary measures to protect its activity and knowledge through the trade secret. As a starting point, the delimitation of the object of protection is decisive for them; from then on, they define the protection strategy considering the possible alternatives, patent, utility model or trade secret, depending on the characteristics of the research, the requirements of novelty and inventive step, and taking into account variables such as the publication or not of the data, for example.

Thus, “in the last 6 years, we have registered 52 secrets and rejected this form of protection in a total of 10 inventions. The application by sectors of activity is very varied, predominantly in the areas of science and technology in Physics, Materials and Agriculture,” says Etxabe. 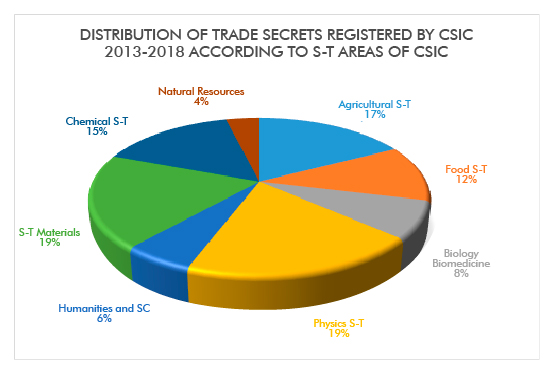 A significant proportion of the trade secret protocols launched by CSIC are for technical inventions. The remainder are trade secrets that include algorithms, databases, mathematical models and, in short, any information or knowledge that, as defined by law, is secret, has commercial value for that reason and has been the subject of reasonable security measures by its owner for non-disclosure.

According to Javier Etxabe, most of these secrets are directly related to production processes or manufacturing of products, devices or similar. Commenting on some specific cases of protection under this modality, Etxabe tells us how CSIC and Thermal Recycling of Composites – TRC, in collaboration with one of the largest producers of wind energy in the world, EDP Renováveis, has developed a new technology for the recycling of wind turbine blades for wind farms. An interesting case to show us the compatibility of the secret and patent modalities since the project began with protection under secret, to subsequently give rise to a patent application.

Also, reminding us of the case of “the best kept secret formula, the spark of life formula”, Etxabe shares with us the invention of wine-flavored water that carries no risk of drunkenness. The secret of this enriched water, whose commercial formula has not been revealed, lies in the flavonols of the grape and in the wine elaboration residues that the product incorporates and that endow it with an extra salubrity, due to its content in antioxidants capable of preventing diseases such as diabetes. Due to its socioeconomic impact and the indisputable benefit it represents in improving diagnoses, it is worth highlighting the development of a system to help diagnose breast cancer based on artificial intelligence that will make it possible to reduce the number of false positives. This new system has been developed by researchers from the Institute of Corpuscular Physics, a joint center of the CSIC and the University of Valencia, and the University of the Basque Country.

In conclusion, we asked Javier Etxabe whether in recent years they have seen an increase in the number of secret protections, as compared to more traditional types of protection. He states that, in this case, trade secrets are acquiring greater prominence, like other types of protection such as plant varieties or intellectual property. “Although trade secret can be a complement to patents, in most cases it is presented as the most suitable option to protect knowledge that does not meet the requirements of patentability,” concludes Etxabe.

Undoubtedly, the value of the Trade Secrets Law for CSIC, as well as for other public organizations, research centers, and private companies, lies in the legal security it provides for innovation, reducing the risk of misappropriation, theft and/or unfair competition. A risk that jeopardizes the increasingly high value of intangible assets.

This new legislative framework, in addition to offering greater protection, favors investment associated with the generation of knowledge. It is, in short, a law that benefits companies and organizations of all sizes and sectors, for which the knowledge and confidential information they handle is fundamental.