RENOWN AND THREE-DIMENSIONAL TRADEMARKS: ANALYSIS OF THE JUDGMENT BY THE GENERAL COURT ON OREO V. GULLÓN

RENOWN AND THREE-DIMENSIONAL TRADEMARKS: ANALYSIS OF THE JUDGMENT BY THE GENERAL COURT ON OREO V. GULLÓN

On 26 March 2015, Gullón Cookies SA applied to the EUIPO for the registration of GULLÓN TWINS COOKIE SANDWICH as a trademark of the Union to distinguish “cookies”. 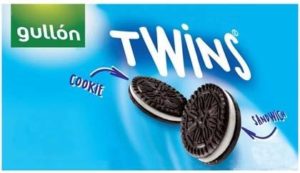 Following its publication, on 7 August 2015, Intercontinental Great Brands LLC filed a notice of opposition based on its earlier trademarks “OREO”: the first was a three-dimensional trademark corresponding to the shape of a cookie and the second a figurative trademark corresponding to a packaging image, although the decision was based only on the first the opponent’s allegations: likelihood of confusion (Art. 8.1b) and renown (Art. 8.5) 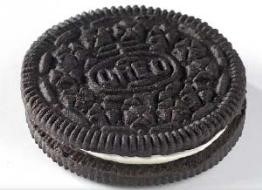 And the decisions adopted by the EUIPO on 7 September 2017 and 5 September 2018, both in the same sense, favourable to the opposing party on the basis of the breach of Article 8.5, all the requirements for their application being considered to be accredited, namely:

Regarding the similarity of the signs, the trademarks were considered to be visually and conceptually similar because both trademarks reproduced sandwich cookies with similar graphic features, the influence of the verbal elements of which the two signs are composed being disregarded in this comparison.

As regards the evidence of renown, it was also found to be clearly established that the previous trademark had been the subject of prolonged and intensive use and that it enjoyed a widespread renown in Spain, and therefore throughout the European Union, going so far as to speak of “exceptional renown”.

And this is, in my opinion, precisely the scope given to the renown of the three-dimensional trademark, and on which element it rests, which determines the ruling made.

As regards the link and the risk of damage, special consideration is given to the applied identity, the method of purchase in self-service stores, the renown of the previous trademark and the consumer’s relatively low level of attention (since it is a daily consumption product) and, among them, again the coincidence in the representation of the cookies.

All this is supported by the study carried out by the opposing party on the association of the contested trademark with the previous trademark, concluding that, although the consumer does not confuse both trademarks, the similarity in the representation of the cookie will make the consumer see the applicant’s product as a potential substitute for the product offered by the opposing party, thus taking advantage of the renown of previous trademark.

Finally, they rejected the existence of just cause by the applicant who claimed an unjustified monopoly on the exploitation of the sandwich cookie image in favour of the opposing party that prevents any other operator from using it.

For this purpose, both the EUIPO Opposition Division and the Board of Appeals based their decision on the existence of other registered trademarks consisting of different representations of a sandwich cookie.

The General Court has confirmed EUIPO’s rulings in its judgment T-677/18 of 28 May 2020, having therefore analysed the same facts on three different occasions before European authorities.

Although the Court’s judgment reaches a similar conclusion, its assessments on the application of Article 8.5 when it comes to three-dimensional trademarks consisting of the shape of a product and the scope of its protection are very interesting.

On the potential lack of distinctive character of the cookie shape, the General Court follows the precedent according to which a certain level of distinctiveness must be recognized for any registered trademark, including of course three-dimensional trademarks, and that, in order to challenge it if required, it is necessary to resort to the cancellation procedure.

With regard to the similarity between the trademarks, it is worth highlighting the emphasis placed on the fact that the level of similarity for applying the protection of Article 8.5 may be less than that required for applying Article 8.1b), since the first case requires only that the public establish a link between the trademarks, whereas in the second case it must be sufficient to give rise to a likelihood of confusion between them.

But are representations of the product itself not some of the three-dimensional trademarks, and should they all be regarded as having a low distinctive character?

In any case, and even taking into account this circumstance, the Court recognizes a certain similarity between the signs, which allows further analysis of the remaining requirements of Article 8.5-.

Following the Court’s interpretation of which are the distinctive and dominant elements of the conflicting signs is key.

The trademark applied for is a figurative sign composed of several word and graphic elements, the most important of which, in their central position and size are, in the Court’s view, the two sandwich cookies and the terms “twins” and “gullón”, without any of those elements alone being dominant.

The previous trademark consists of the representation of a sandwich cookie composed of two round cookies, in the upper central part of which the term “oreo” can be seen; that term does not stand out more than the other decorative elements, also in the view of the General Court. Therefore, that cannot be considered to be the sole or most distinctive element of the trademark or its dominant element, which determines the conclusion as to its similarity to the trademark applied for.

And from all of this we can conclude that phonetically the trademarks are not similar, but they are visually and conceptually similar, albeit to a low degree.

It is also important to consider whether a three-dimensional trademark acquires distinctive character or even renown when it is used in conjunction with a denominative or figurative trademark and, more specifically, in the case of a trademark consisting of the shape of a product or its packaging, provided that the public continues to perceive the products as coming from a particular company.

The Court does not seem to have any doubts about the trademark’s renown in view of the opposing party’s evidence, which does not seem to be of a different nature either because it is a three-dimensional trademark.

The applicant disputes not only the scope of this renown but also the actual and effective use of the previous trademark in promotional materials or containers, i.e. in two-dimensional representations of the three-dimensional trademark.

Is the two-dimensional use of a three-dimensional trademark an actual and effective use? Can its renown be demonstrated using this type of evidence?

As regards the link between the trademarks being analysed, six factors were taken into account in order to determine the existence thereof: like use of figurative elements, the renown of previous trademark, the applied identity, a not particularly high level of attention from the public, the points of sale of the product and the possibility of the two appearing side by side and the self-service purchase method, which makes visual matches more relevant.

Regarding the risk of damage, as it had been demonstrated that the relevant public would establish a link or association between the trademarks, it was determined that registration of the contested trademark would allow it to obtain an unfair advantage derived from the first, previous trademark.

This would all be the case even if the other verbal elements of the trademark being applied for were different, even if they referenced the corporate origin of the product, as in the case of Gullón, and could avoid a likelihood of confusion, because, in the Court’s view, they would not have avoided engaging in “free-riding.”

Finally, regarding the just cause for the use of the trademark applied for, which would force the owner of the renowned trademark to tolerate the use of a similar trademark, the Court clearly indicates, based on the precedent, that this must be interpreted restrictively, and its assessment is not appropriate in this specific case given the similarities in the representation of the same product.

In conclusion, based on a three-dimensional trademark’s recognition of its renown consisting in the shape of a product, registration is denied for a figurative trademark that includes as part of it a similar representation of that same product.

But there are other decisions made at the national level regarding the same trademark which have reached different conclusions.

The Spanish Patent and Trademark Office (SPTO) has also ruled on a trademark with identical composition and on the opposition filed by Intercontinental Great Brands LLC on the basis, inter alia, of the same previous three-dimensional trademark and, in these cases, the conclusions reached are different.

The former states that the trademark applied for may coexist with the opposing trademarks because of their differences in the overall graphic-denominative and conceptual design, considering that there is no likelihood of confusion or association with the previous trademark.

In the appeal ruling, recognizing the renown of the previous trademarks, the limitation of the scope attained by this renown/notoriety to the name “OREO”, without extending it to the shape of the sandwich cookie, also leads to the conclusion that there is not sufficient similarity between the signs involved for there to be a connection between the products or a link that would enable unfair advantage to be taken or the distinctiveness or notoriety/renown of the previous trademarks to be impaired.

The Office does not consider such an unfair advantage to have been proven, taking into account all relevant factors and the sum total of the evidence adduced between the parties. The consideration given to the scope of the market research studies also analysed by the General Court should be highlighted in relation to the assessment of the evidence.

Among other circumstances, the identification of the business origin in the trademark has also been taken into account, with the incorporation of the name “GULLON”, considered to be renowned in the cookie industry, and which has been granted to the applicant and is in force, among others, the three-dimensional trademark consisting of the shape of a cookie (trademark no. 3554396): 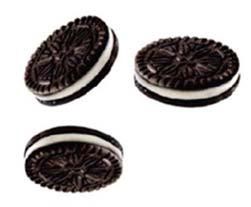 Regarding the notoriety/renown scope, I believe that it is important to expressly refer to the resolutions issued by the National Courts in proceedings that have involved the same parties and that have limited it, in their opinion, to the OREO name without extending it to the form of the cookie due to its scarce uniqueness.

Concerning this point, I would like to refer to one of these rulings, Supreme Court judgment no. 4245/2015 (ECLI:ES:TS:2015:4245), in which the Court also ruled on the use of three-dimensional trademarks and the scope of their protection, albeit from the perspective of potential trademark infringement and acts of unfair competition, and in which it was in fact determined that the renown of the same three-dimensional trademark analysed by the General Court lay solely in the name OREO, as indicated by the SPTO in its ruling, having considered it to be proven at that time that several round, black and white sandwich cookies already coexisted on the market; all of this for the sole purpose of showing that the scope of the renown and the three-dimensional trademark distinctive features definition have played and continue to play a decisive role in this matter.